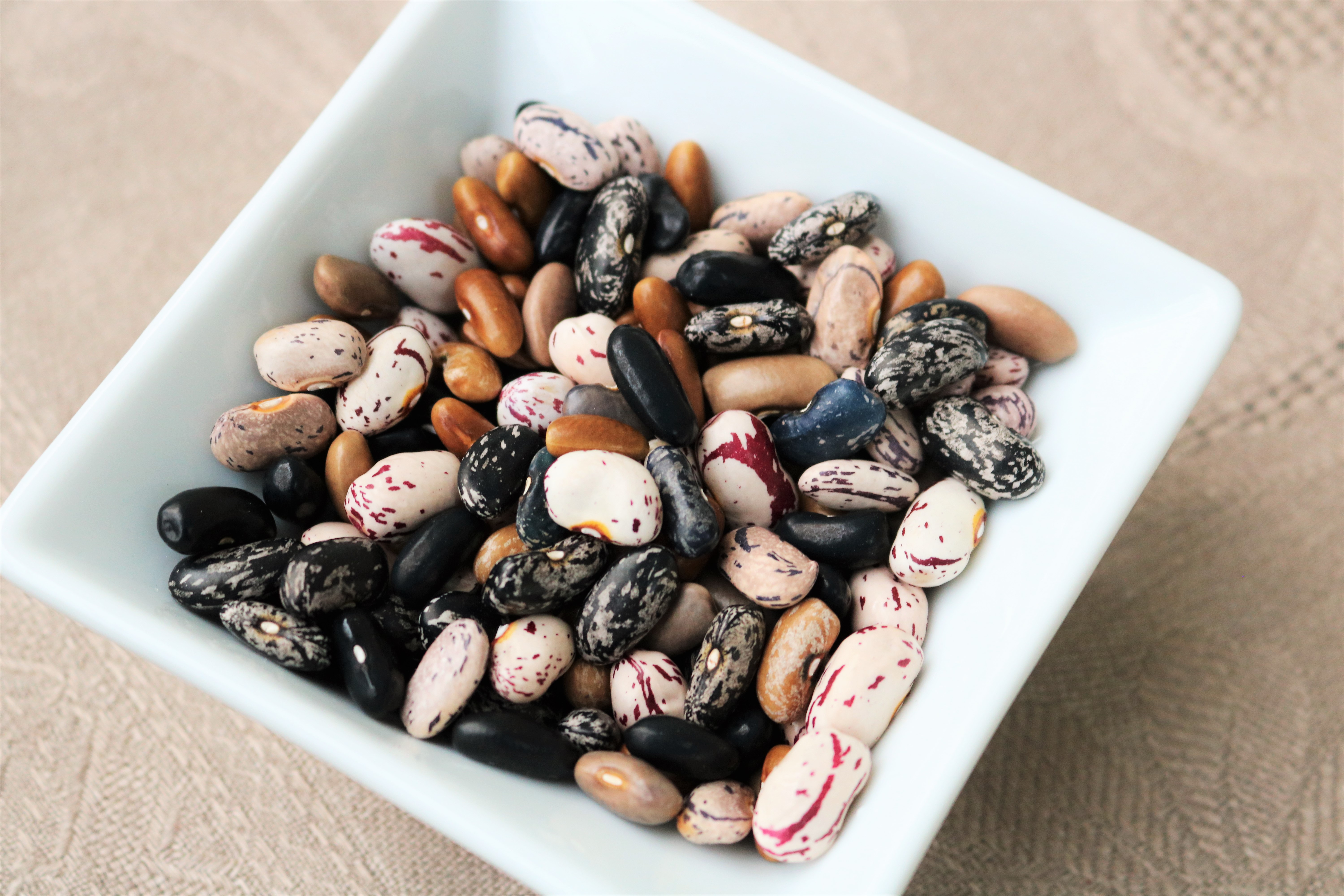 “Never ever ever mess around with my greens. Especially the beans!” My sentiments exactly. This line from the musical Into the Woods echoed through my mind as I watched the beans twist and curl their way up the fences. This summer was, for me, an adventurous journey into the world of funky, heirloom beans.

Too Many Kinds to Count

There were so many varieties, each with distinctive patterns and colors. White beans inside yellow pods, black or brown beans in green pods, pink stripes, purple stripes, deep purple; these are just a sampling of this summer’s collection. Even multiple continents made an appearance. There were beans from Italy, Ireland, the U.S., Germany, France, the Netherlands, and even a bean developed in good ol’ Minnesota.

I used the forgotten spaces of the fenceline to plant the pole bean varieties. I tucked the bush beans into open areas or spaces previously used by early spring vegetables like radishes.  Because beans need to be planted once the soil is warm, you can inter-plant them with plants like sugar snap peas and radishes that bear quickly in the spring and then are done. Beans mature much later than radishes or peas, so by planting them in the same space, you are maximizing your garden yield.

A Beneficial Legume for The Garden

Beans are part of the legume family. Legumes are a beneficial type of vegetable to plant throughout your garden because legumes fix nitrogen. They pull atmospheric nitrogen out of the air, and then the bacteria attached to its roots convert the nitrogen into a form usable as a nutrient for the plant. When the plant is done, the usable forms (ammonia, nitrates, and nitrites) are available in the soil for the nearby plant roots to use. Biological nitrogen fixation is an example of nature using its own plants to fertilize itself.

This concept is also referred to as companion planting, where plants mutually benefit each other when planted next to one another, a practice that has been done for centuries. Native Americans mastered this age-old practice when they would plant a combination of vegetables they named “the three sisters.” First they buried corn kernels into the ground in the shape of small rings, and then they surrounded the corn with beans. Lastly, they planted squash in the spaces between the corn/bean rings. The beans fertilized the soil for the corn and squash, using the tall corn stalks as a trellis to climb. The squash formed a high thick carpet on the ground that cooled the roots of the beans and corn, allowing them to thrive. The squash’s thick prickly leaves also served as a deterrent for animals that might want to come and nibble on the crops.

The Health of Beans

Beans are not only good for the soil; they are likewise good for your health. A wonderful source of the B vitamin folate, they are also high in fiber, protein, iron, and magnesium. As a nutrient-packed, low fat, and very inexpensive vegetable, let’s just say their return on investment is huge. For each single little bean buried into the sweet summer dirt, you will reap a hundredfold in harvest.

I began harvesting the long, thin French varieties in July. They add a delightful crunch to salads. You can steam them with a touch of butter and lemon or steam and quickly cool them to dip into aioli on an antipasto platter. The wax and purple varieties came next. These went into stir fries, soups, and casseroles. Finally, a breakpoint arrived where I halted harvesting them so the remaining could mature and become dried beans for this winter.

This is where I find myself now. I have brought all the beans in from the garden. I have threshed the driest of the bunch to get the beans out of the stiff, dried pod. The rest find themselves spread out in the basement until they are also ready for threshing.

I have pulled out a select few from each variety to plant again next year. I will store these in a cool spot until early next summer when I will plant them. The remaining dried beans are awaiting incorporation into our winter menu of hearty stews, casseroles, bean salads, and dips.

Garden grown beans offer a welcome consolation in these cool, dreary, autumn days. Whether it’s a cassoulet or a bowl of ham and bean soup, these are the gifts summer has given to winter. The memory of delicate purple flowers gracing the tips of vines exploring their way up and over the fenceline. Tiny little bean pods transforming into delicious adult counterparts. I taste these memories as I bring a spoonful to my lips.

Yes, as the fairy tales have claimed, beans are certainly magical. And they are not to be messed with.

4 thoughts on “A Year for Beans”